Since my last blog about the improvement in Zinger’s demeanour with the help of various natural and a couple of veterinary drugs, I am delighted to report that over a year later he is still mostly happy, healthy and physically pretty fit.

Zinger stopped swimming in September 2014 which we suspect was due to the dementia. He used to fly into any water like a mad thing which abruptly stopped when his confusion became more apparent. There were several times over this summer when he started swimming again with great gusto and doing his usual rolling and rolling about to dry off. It is a joy to see after he has been so distressed for over a year.

We had the most awful experience one day in July when for no apparent reason one of my other four dogs attacked Zinger which meant the two youngsters piled in too. It was a hell of a fracas resulting in poor Zinger having a ripped ear (along with other smaller injuries) which splurted blood all over the place for several days. Zinger was very nervous for a long time and it still worries him when the other dogs erupt into barking. I understand it is not unusual for younger dogs to turn on older dogs but this is not an episode I want to repeat. Luckily all healed very quickly and although there is still a split in his ear, it doesn’t give him any trouble. 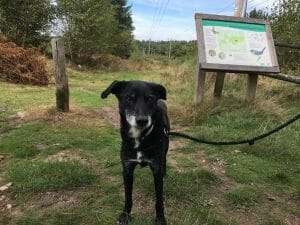 Zinger had his 15th Birthday on the 24th September 2016 and has been a bit up and down since. He seemed a bit more disorientated and not keen to stay in the sitting room or kitchen but would rather be outside lying on the patio, the lawn or upstairs. Luckily, now it has become colder he is spending more time indoors. We even bought him a coat in case he kept on wanting to be outside. Zinger is still eating well, loves his walks and is happiest lying in the sun or going for a long walk.

I have decided to change the medication from Vivitonin to Selgian, which he is now having with an Activait in the morning and then a Zylkene at night. He has been sleeping all through the night for the past couple of months which is brilliant. 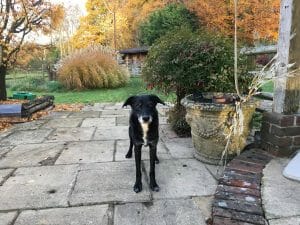 On the patio, we have Fuchsia which forever will be known as Zinger’s scratching bush as he has completely redesigned it this summer by regularly grooming himself with it. 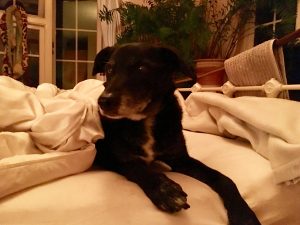 Zinger is having difficulty jumping onto a bed now and sometimes misses so we have non-slip mats everywhere. He still loves his walks and we always have to guide him up into the car or he takes an enormous leap and is in danger of missing and falling on his back. 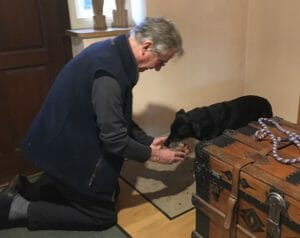 There is no doubt he is confused at times, but he recognises everyone and welcomes them enthusiastically, he enjoys his food, (although we have had to hold the bowl off the ground for him!!) and still crunches up his raw chicken wings in the evening.

I have had several moments over the past couple of years when I have felt maybe the end was coming as he seemed so distressed, but after a few days, something clicks and he becomes more relaxed again. We just take each day as it comes and thoroughly enjoy each one that Zinger is fit and well. 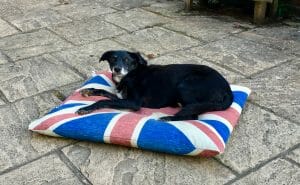