About our new chickens at AA HQ and a few tips for your first foray into chicken keeping. 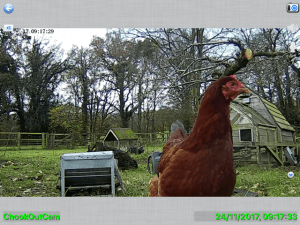 Ginger Nut Ranger as seen on Chook Out Cam

Last week we took delivery of four beautiful new pullets to add to our little flock of seven hens.  Some of the current flock have not really laid many eggs this year and are fairly elderly so we decided to add some youth to the equation which sometimes helps get the old ladies laying again.  They came from the very helpful Andy at Poultry Direct as none of our local farms had any point of lay chickens (around 22 weeks old). So we have two beautiful Ginger Nut Rangers(a hybrid layer Rhode Island Red X Light Sussex) they are a really good size for 20 weeks and they will hopefully be able to hold their own if the old ladies try to ‘hen peck’ them! The other two are Brompton Blues (Araucana X White Leghorn) and they are much smaller even though they are 22 weeks old. We will always know when they have laid as their eggs are blue.  One of them laid a beautiful blue egg the very first morning after they arrived.

When the hens arrived at about 6.30 in the evening, the others had all gone to roost as it was dark.  We posted the pullets into the back of the hen-house while the others were asleep, so the newbies learn where to come to sleep from the beginning. The first day went well but I was worried that the old ladies would not allow the youngsters into the house in the evening, they did chase them out a few times but with a bit of support from us, the new girls found their way in to the house and safely tucked up with the automatic door closed for the night. By the sixth night and after two were shut out on two nights, they were all going in to roost in an orderly fashion.

It started me thinking about all of the equipment we have tried over the years and what works best for our chicken keeping. If you are thinking of starting out with a few chickens of your own, this could be helpful.

We are fortunate at HQ to have a good sized paddock with two ancient apple trees and it is around these that we put the chickens enclosed by a 50 metre electric mesh netting. This is powered by a solar powered electric fence energiser and as long as it points at the sun it usually only needs a proper charge once a year when the weather has been dull for a prolonged period.

There are so many hen houses to choose from, ours is a dutch barn style which was on wheels with a ramp, we have since added a couple of metal gypsy caravan wheels and two handles so we can move it easily and regularly.  We also have a Chickenguard door opener which we have written about in a previous blog.  This makes life so much easier, no more waiting til dark in the summer to go and shut the chickens up, it happens automatically and opens again in the morning!

The other problem often associated with chicken keeping is rats! A few years ago we were overrun with rats. We set up cameras on the chicken pen and as soon as it was dark out they popped from their holes all over the place to help themselves to all the chicken feed and corn.  Something had to be done! After a bit of research and several recommendations we chose Grandpa’s feeders, (there are other similar on the market, but I liked these) one for the layers mash and one for the corn.  The feeders are treadle feeders and the chickens learn to tread on the bar to access the feed and rats are not heavy enough for it to work.  We have not had issues with rats since!