How do they do that? The Incredible Journey 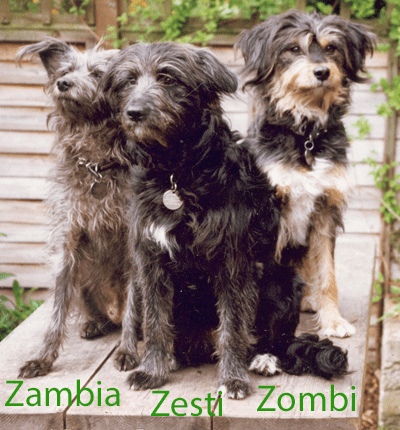 The recent story of Pero the sheepdog finding his way back to Wales from Cumbria (240 miles) reminded me of my own dog Zombi who amazed us with her own ‘incredible journey’.
In 1992 we were going out for a birthday treat down in the New Forest at Gordleton Mill. The plan was to take the dogs for a good walk in the forest in the early afternoon (it was early January so got dark about 3.30) – then take them on to stay with a friend and go on to the hotel. I had 3 generations of my dogs with me – Zambia who came back with me from the mountains of Crete after I finished living there, her daughter Zombi and her granddaughter Zesti. The original Greek Mountain Dogs.

We stopped just south of Lyndhurst at Clay Hill and set off walking. Unfortunately Zambia’s (she was a feral dog when I found her while living in Crete) wild instincts lead them off chasing deer. The three of them scattered into the forest and the barking got fainter and fainter. After an hour of searching only the youngest Zesti had returned. By now it was getting dark and still no sign. Finally when it got dark they were still gone. We drove to report them missing at the Police station and the forestry commission and dropped off a lonely Zesti with our friend and continued on to the Hotel. The Hotel was about 8 miles (in the opposite direction to home)  by road from where we lost them and of course we had never been there before the walk. We had a fabulous meal at Gordleton Mill but rather ruined by worry for our 2 missing dogs.
About 5 a.m. I was woken by a noise – it sounded like a dog was outside our 2nd floor hotel window. I opened the curtains and there on the fire escape looking at the window and pointing was a wet, tired, filthy but happy Zombi. She had made her way across unfamiliar country, through Brockenhurst, across a main road, across the railway line, to the hotel, round the back, up the fire escape to exactly outside the correct room. The hotel was in the opposite direction to home and none of us had ever been there before. Truly Zombi the wonder dog!
As for 14 year old Zambia it turned out that after her hunting, when she was tired and hungry and realising she was lost, introduced herself to a friendly man in a caravan. He of course fell for the bright eyes and wagging stump of a tail (lost in Crete). He kindly fed and cared for her overnight then walked her in to Lyndhurst Police station to report he had found her, then offered to care for her until the owners were found. We finally caught up with him and Zambia walking back to his caravan. We returned home relieved with all three dogs.
Which takes us back to the question – how do they do that?