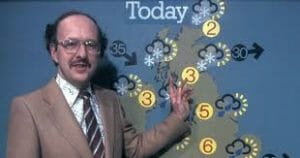 30 years ago today I was housesitting at Hyde Farm, Hindhead for three months when the big storm struck.  I was looking after two lovely Labradors, a cat, four ponies, several chickens and a dozen or so calves.

It was a beautiful, old fashioned working farmhouse with a woodburning stove in the sitting room and an Aga (switched off!) , a small telly and I would swear a ghost!

The night the storm happened, I went to bed early as I was cold,  Zambia (my old dog), and the younger Labrador, Zulu snuggled up in  bed with me and we slept through the storm!   I awoke at 6am and thought there had simply been a power cut until I went outside to do my morning chores and found chaos all around the house and grounds. Below my bedroom window there were two metal dustbins which had been blown all the way around the house from the opposite side (and I slept through it!). there were leaves everywhere and fallen trees all along the edges of the fields.  I checked and fed the horses, chickens and calves.. luckily they were unharmed and there was no damage to the farm or outbuildings. I set about sweeping the leaves, raking the drive and generally clearing up all the debris I could.

Later, I set off in my car with the dogs to take them for a walk and feed a local cat.  The roads were almost completely blocked there were trees across the  high hedges of the lanes so I was able to squeeze underneath them.  There were enormous trees down along the A3 at Hindhead and dozens of  people wielding chain saws were slowly starting to clear single tracks on the roads.  So many places were cut off.  Everyone was out and about helping everyone else. 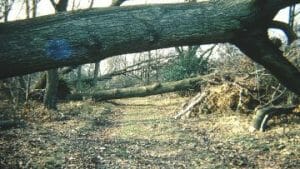 Back at Hyde Farm, I found a calor gas stove to cook the basics and make coffee and tea.  I had cooked up a load of mince the day before so had something to eat for a few days. I was without power for two weeks whilst carrying on with my job. Once I was into a routine of doing everything I could in daylight. Getting logs in for the fire and candles to read by, it was spooky at times, but as long as the dogs were with me I was fine.  Of course there was no way of finding out the extent of the damage apart from very locally as with no power there was no TV and of course no smartphones, no tablets, only a landline which I avoided using as I would have to deduct the cost of the calls from my final bill. 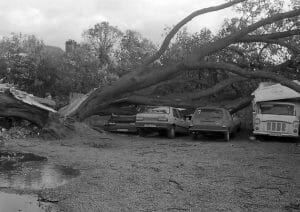 Since then we have seen many storms, but none so fierce and damaging in this area. There is one place locally where they have not cleared away the debris and all the fallen trees are covered in moss above a carpet of bluebells in the spring. 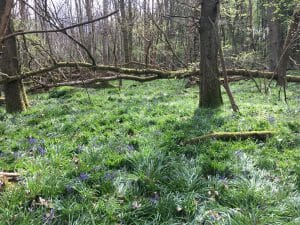