Remember Remember the 5th of November

The time of year is upon us again when many people plan to light big bonfires for the 5th November. We all know about protecting the wildlife from the seasonal bonfires, making sure we don’t set light to the fires before checking for hedgehogs, dormice, etc but we do need to think about husbands too!

Last week, my husband in his infinite wisdom decided to light the bonfire. He had cleared the runner bean bed and sunflowers and there was a lot of old wood etc, all of which was a little damp, to be burned. For some unknown reason, he got some petrol, a long piece of touchpaper, a lighter and then BOOM! A fireball hit him, setting light to his hair, his shirt and severely burning his face and arm. I was oblivious as we were in the office and on the phone. My nephew, Ed was working in the house and heard the boom followed by screams and went to investigate. Trog (my husband) had ripped his shirt off as it was burning and had run to the nearest tap where he was madly dousing himself in water.

By now, Ed had come to the office but couldn’t say anything as we were all on the phone. He came back about 10 minutes later to say that Trog had had a bit of an accident (master of the understatement). I went out to see Trog half naked flailing his arms and dousing himself with the hose. Each time he stopped the pain was excruciating, he had to keep on dousing! After about 20 minutes he was able to leave the water long enough to get in the car to get to the Small Injuries Clinic in Petersfield.

We took a jug of cold water in the car with us which he plunged his arm into continually, madly splashing his face, he was clearly in agony. He was the first person to say that he had been an idiot and the first person to say he knew better.
So perhaps these pictures can be a warning to anyone thinking of using petrol to light your bonfires this bonfire season. It has taken two weeks and here are the pictures of the healing progress: 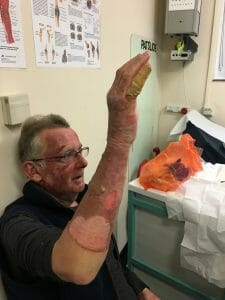 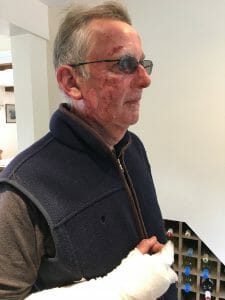 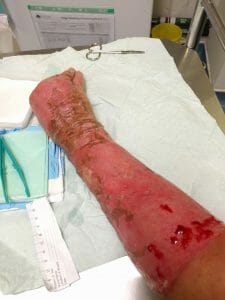 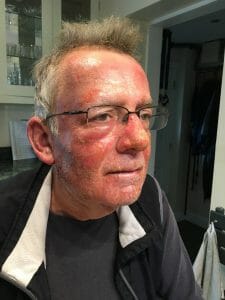 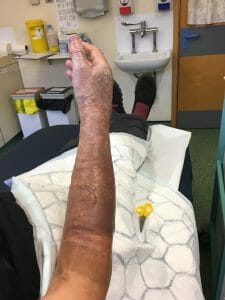 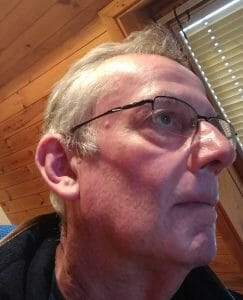 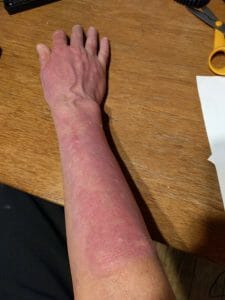 Best wishes to you and your pets over the bonfire season – stay safe. 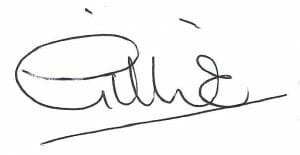