The Best Job in the World

Our amazing team of Animal Aunts regularly tell us that being an Animal Aunt is the best job in the world. They get to travel, meet wonderful animals and families and pick their own hours. But the thing we hear most often is “no two days are the same” and we all know variety is the spice of life!

One of our long term Aunts Vicky completed a very regular sit in France earlier in the summer and, with the Client’s permission, wanted to share a most amusing tale. We’ll hand over to Vicky:

The Trials and Tribulations of an Animal Aunt en France.

Meet ‘Lord Charles’ aka ‘Charlie’ who is a cheeky two year old Basset who arrived from the UK to join the Basset household in France! 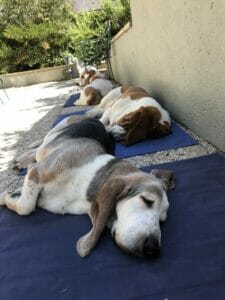 The ‘Gang’ consists of; Floyd who is in his 14th year and a legend, Bertie who’s a happy boy who enjoys a good bark and Spot who happily lives in his own special world.
Charlie has settled in well, although it appears he has a penchant for towels, dish cloths and flannels… so far!

Early summer, I arrive to cover my regular sit with the boys, all is well. That is until the second day when Charlie (along with the others) accompanied me to the bathroom, there is no privacy when you have pets! Whilst my back was turned Charlie had found something and taken off like a Basset possessed. Bassets are always surprisingly fast moving when up to mischief.

I followed him to find him happily chewing on what looked suspiciously like a pair of black pants! When he spotted me approaching him he swiftly swallowed them and looked very pleased with himself indeed!  I thought they were mine as they looked to be cotton. I spoke to the client who recommended we should wait.

A week passes and I’m on military precision poo watch! But so far nothing. He is eating and drinking as usual and appears to be in fine fettle.

I decided to pop into the vets with a translated note explaining what had happened. I’ve had mishaps with Google translate before so I was taking no chances.

Bonjour!  The veterinary nurse studied my note and looked quite worried as she asked ‘has he eaten all of them?’. Oui! And ‘how big were they?’Then she went away to speak with the vet looking somewhat perplexed. Before she returned I had a light bulb moment and realised that she must have thought I meant trousers as opposed to underwear! When she came back I pointed to my underwear. With a nervous laugh and a look of relief on her face, I was told to watch him and come back if I became concerned.

Return of the Pants

Another couple of days pass and Charlie is fine until one day when I hear a retching sound at some unsociable hour of the morning.  My first panicked instruction is  “get down off the bed!”. As Kings of comfort where else would they be sleeping? I quickly turn on the lights (it’s amazing how the sound of a dog retching motivates you!) and see Charlie being sick and there they are. The return of the black pants! I was overjoyed and so relieved.

So being the curious person I am, I laundered them to try to identify them, which confirmed they weren’t mine! A tad on the ‘petite’ side but I don’t need to labour that point. They were not cotton but very elasticated (Spanx) so would never have broken down or been able to pass through the Pyloric Sphincter. The Pyloric Sphincter is a band of muscle between the stomach and small intestine. It acts as a valve controlling the flow of digested food but luckily not the pants! It took 10 days from initially swallowing the pants to bringing them back up again.

When the client returned I happily reported all of this and pointed out that they were not mine. Somewhat bizarrely they were not the client’s either. It remains a mystery where Charlie found them or indeed who they belonged to!

The good news is Charlie was completely unphased by his ordeal. Will it deter him in the future? Not likely, but one wonders where the ‘hunter’ instincts kicked in for Spanx!