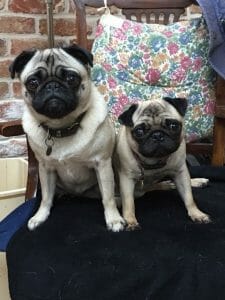 Many of you will know that Pugs can be very hungry little dogs and will eat most things given the chance. Last week we heard a very alarming story. 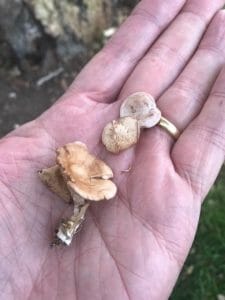 One of our very dear Clients took his two little Pugs to a rugby match at his grandson’s school. They had a mooch around the edge of the pitch and then he popped them in the back of the car in their cage, with the windows open.  When he returned 20 minutes later, they had both been violently ill  from both ends and were in a great deal of pain.   He realised they must have eaten something and there were some wild mushrooms (possibly clitocybes) growing from an old dead oak tree amongst the grass.

They were taken to the vet where they were put on a drip, made to vomit and given charcoal.  The older one recovered within 24 hours and was sent home and is completely mended the younger one took a turn for the worse and stayed in over the weekend.  At one point they were prepared for the worst, but the Vets have battled on and managed to turn her around and she is now home. It took a couple more days for her to stop vomiting, but teaspoon by teaspoon she is now keeping her food down and is back to her bouncy self.

The Client sent me a picture of the mushrooms and with a little help from an expert,  I was fairly sure (though without spore prints and further examination I can’t be sure) that the mushroom was Clitocybe Rivulosa /dealbata or Fool’s Funnel  or False Fairy Ring which is a grassland fungus and definitely could grow beneath oaks.  They are pretty toxic to humans, although generally not fatal as the victims would throw it up too quickly to absorb a fatal dose..  The symptoms in humans would be excessive salivation and sweating within half an hour of eating them. Depending on the amount consumed there may also be abdominal pains, sickness, and diarrhoea together with blurred vision and laboured breathing.  The poor little Pugs suffered all of these symptoms, but it looks as though. with speedy action with excellent veterinary help, they are out of the woods.

If you have a “dyson-dog” please take care to look out for poisonous mushrooms when you are out walking at this time of year.

The owner of the two little Pugs has worked tirelessly for Pug Welfare and if anyone would like to donate to help the ever increasing population of Pugs needing to be rehomed/rescued, her charity is www.pugwelfare-rescue.org.uk